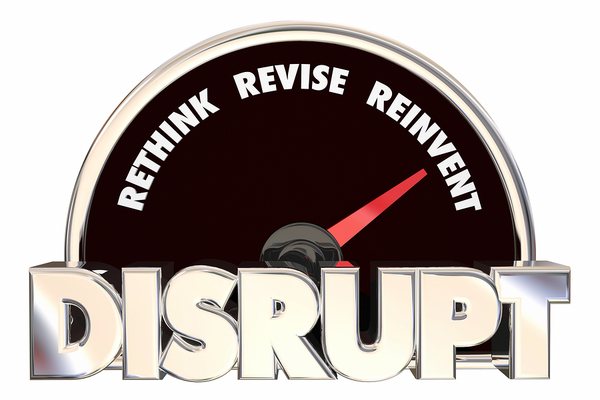 Disruptive isn’t a dirty word, but it can be a scary one.

Why does the word “disruptive” raise such fear among so many people? You can argue it’s a buzzword, but people are annoyed by buzzwords. Uttering “disruptive” during a meeting can get you looks more along the lines of profanity. But “disruptive” isn’t a dirty word: It’s an honest reality, and disruptive innovation is sometimes the only way forward.

Change Is Good, Not Easy

If you look at the history of innovation, change — especially enormous, socially altering change — has been greeted with fear more often than joy. The Luddites, the original critics of disruptive innovation, were, contrary to the definition of the word, actually weavers and other workers terrified that machines would take their jobs. And they weren’t wrong; the rise of industrial looms and weaving technologies meant hand-weaving was largely relegated to hobbyists and staunch traditionalists.

The problem with disruptive change is that it shakes everything up and some people are afraid they’re going to be shaken right out of their role. It might mean entire classes of products and services disappear. In other cases, like ride-sharing, it means what’s traditionally been a cozy industry nobody’s looking at is suddenly the object of great scrutiny.

At the same time, disruptive innovation is what makes our lives better. The washing machine was “disruptive” to the hand washed laundry industry, but you’ll notice nobody wants to go back to the days of washboards and tubs of suds. So how do you create a culture that makes “disruptive,” both the word and the concept, a positive?

If only disruption were this simple!

We’ve all heard the Silicon Valley adage “move fast and break things,” but that doesn’t necessarily make sense for everyone. A better way, for most companies, might be “Think smartly and act quickly.” There’s a vast difference between a company being nimble, which is what true disruption is all about, and a company just rushing through things messily.

One of the key problems in any company is having a rapid process. Ideas need to be considered quickly and acted on just as fast. So, set up a situation where, for example, somebody with an idea runs it by two or three other people who offer feedback and perspective, and then look at a way to prototype it. If you offer a service, can you simulate your business digitally, install the idea, and see the effect? If you offer a product, can you prototype it rapidly and try it out in the office to see if it works?

Innovation can be slowed down by people objecting, but ignoring objections isn’t smart. Rushing a product to market without thinking about it is a good way to have to rush the product off the market just as quickly. So, create a process with objections. What’s the impact? What are the risks? What’s the benefit? Small groups should weigh these, with fast deadlines, and make a decision.

In the end, it’s a question of momentum, with innovation. Companies that slow the momentum of disruptive innovation risk getting left behind, but those that do nothing but risk slamming into a wall. The trick is to balance the two with small teams, an open innovation process, and a willingness to take the big leaps. If you’re ready to make “disruption” a positive, join the IdeaScale community.